H4XHQ
click to copy
This code is over 6 months old.
Codes expire after 6 months and will no longer function.
This game is archived.
If you with to unarchive it, click the "restore" button in the options menu.
This code can also be found at workshop.codes/H4XHQ 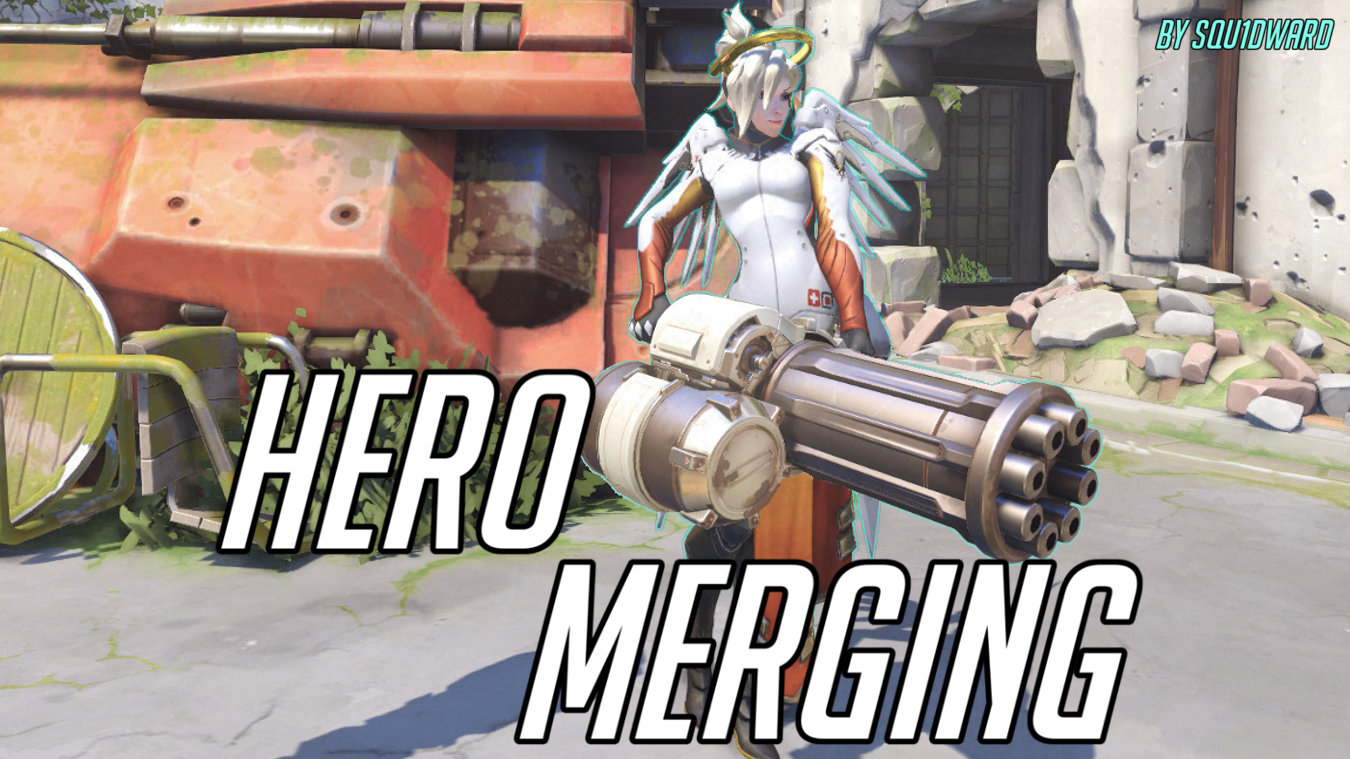 In this mode crouching next to a teammate will allow you to merge with them. Merged heroes are controlled by all the players merged with them and have all of the abilities of the heroes merged with them, but only appear as one hero. When merged with another hero using an ability or attacking reveals your hero in the merged hero for a few seconds in the form of a hero icon.

Crowd controls such as stuns or hack will apply to everyone in the merged hero. Sombra's stealth will also be interrupted if anyone in the merged hero attacks or uses an ability. Most movement abilities will work while merged with a few exceptions that are difficult to detect such as Hanzo's Lunge and Brigitte's Shield Bash that may be added in the future. Holding interact for 1 second while not merged with anyone will disable merged movement abilities in case someone thinks it's funny to blink you off the map every time you spawn.

It sounds a little complicated with this description, but it really isn't. Just walk over to the nearest teammate and crouch at them until something happens. It's fairly intuitive once you see it working.

This game has lots of Workshop settings. Check in the second rule for more details about them and how to use them! The game will try to explain all the settings that are enabled when players first join. This gamemode is also compatible with most event gamemodes that support the Workshop!

Made the main merge check much more consistent, enabled Duplicate, added a setting to use Start Forcing Position instead of the usual positioning system, and improved Pharah's merged flight!

Changes to the behavior of Workshop Crowd Controls in the latest patch have broken the feature where Crowd Control is applied to all merged players in addition to the base player. A partial fix has been added in this version! Some abilities may continue to work when the base player is stunned. Unfortunately, there's nothing that can be done about it at this time.

There's now a message with a brief explanation of how to play when a player spawns for the first time!

A message will appear after spawning for the first time if special settings such as Merge Limits or Health Merging are enabled!

Changed the inconsistent behavior of base invulnerability abilities between abilities like Wraith Form and Ice Block. Wraith Form, Transcendence, Meteor Strike, and Ice Block now all prevent Merged Heroes from attacking while the ability is active. This change has also been applied to Sombra's Stealth, so teammates are less likely to interrupt it.

When Health Merging is enabled players will now unmerge with a minimum of 30 health when unmerging with a damaged or dead base hero instead of 1 health. This is due to damage intended for the base hero making the unmerging mechanic with Health Merging enabled completely pointless in most scenarios.

Pharah's merged flight has been improved!

Fixed a bug where players could merge through walls!

Fixed a bug where dead players could merge in rare cases somehow.

The Merged Camera no longer goes through walls!

Fixed a bug with the Health Merging setting!

A rework for the Health Merging setting!

Merged Health no longer has to be healed after merging and is now based on the amount of health each player had before the merge.

To prevent exploitable behavior with the above change and add some logic, damage from the base hero will now be transferred to heroes that unmerge if the base hero is damaged when Health Merging is enabled. If the damage exceeds the unmerging player's health it will leave them with 1 hp.

If the base player is killed with Health Merging enabled merged players will now separate with 1 hp instead of dying, because honestly it's just more fun that way.

The HUD Text that displays other players merged with you now tells you their health as well.

Sombra's Hack can now be interrupted by damaging the base hero and the page has been updated with explanations of the Workshop settings and how to use them!

Fixed a bug where sometimes the icons wouldn't work.

Fixed the bugs added by the bugfix!

Added a random mode setting controlled by Global Variable C that when set to true randomizes the merge limits and health merging settings every game!

Health Merging now actually behaves like it's supposed to!

Fixed a bug with the Health Merging setting!

Orisa's Fortify now applies a 50% damage reduction on the base player!

There's now a message for Sombra players when their stealth is broken by merged players for clarity.

Fixed a bug where icons wouldn't always despawn after 3 seconds of not attacking while merged.

Fixed a bug where merged movement abilities could be used to escape Junkrat's trap.

Fixed a bug where players could become merged with dead or unspawned players in rare cases.

The hero positioning loop will now slow itself if the server load is too high. This makes movement while merged slightly less smooth in high server load scenarios, but hopefully the match won't close as often due to excessive server load.

This is a big update because I'm putting all 4 updates I made since I was last able to update in this version.

You can now merge into another player while players are merged with you! Never again will you have to tell someone to get off of you because you don't want to be the base hero as Mercy.

A message tells you to press interact if you can't see!

This mode now supports various movement abilities! Flying Bastion is now more real than ever! Some abilities aren't included due to difficulty detecting them such as Genji's double jump and Hanzo's Lunge. They may be added in the future.

Some movements that aren't necessarily abilities such as Wall Riding and Mercy's slow falling passive are also included!

To prevent trolls from abusing this you can now hold interact for 1 second to disable merged movement abilities!

This mode now supports self healing! Heroes such as Roadhog, Mei and Reaper will now apply their self heal to the base hero. Even Mercy's self healing passive works!

There's now a setting in Global Variable B that allows you to enable an alternate version of the mode with health merging! This will make it so the base hero has the combined health of everyone merged! In this alternate version everyone will die instead of unmerging when the base hero dies. It's disabled by default, because there are a few bugs and the huge health pools make the mode a little less exciting. The option to turn it on is still there, just set Global Variable B to true.

Added the option to use the partially blocked 1st person camera by holding interact.